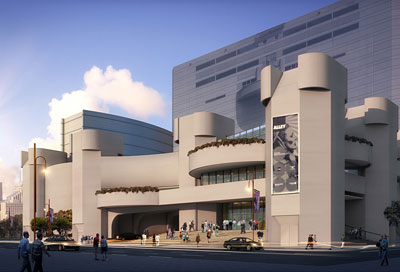 Get the full story at KUHF

The Alley Theater in downtown Houston is one of the city’s most significant landmarks, its opening in 1968 was a nationally chronicled event. Forthcoming renovations will only bring a deep cleaning to the building’s façade. The inside, however, will be almost unrecognizable.

The plans include a reconstructed lobby and a complete renovation of the theatre’s largest stage.

Gregory Boyd is the Alley Theater’s artistic director. He says the stage was constructed at a time when minimalist productions were in fashion, and that this has limited their more modern stagings.

“The building hasn’t been renovated since 1968, so theater technology has taken leaps and bounds in that time, obviously, so we want to make the alley more friendly to modern means of production, but we also want to make more intimate the relationship between the actor and the audience.”

The remodeling will come at the end of a $73 million dollar capital campaign, of which $31 million has already been pledged. The reconstruction will also bring more educational and event spacing and significant green energy upgrades.