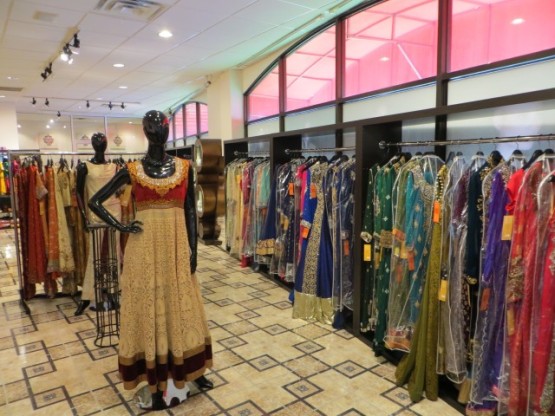 Farrah Akhtar says there’s no such thing as getting a quick sari.

“No, no, no, you want to try everything on, then you need the jewelry the shoes, and then you want to bargain and then you might not be happy with the deal, so you’ll go somewhere else,” Akhtar says.

Akhtar is a community manager for Yelp, and a sari store insider. Our first stop is Poshak, off of Interstate 69. Owner Anas Ahmed gives us the grand tour.

“Let me show you where my saris are kept,” Ahmed says. “So, the side you were on was our fabrics and shoes, this is our bridal and designer studio.”

There’s a few ways to buy a sari here: ready-to-wear, or you could pick out some vibrantly colored cloth and have it sent to their in-house tailor, or – if you have a couple hundred dollars burning a hole in your pocket – they’ll design one for you from scratch.

“The design process could take up to a week,” Ahmed says. “You basically sit down, you pick out your threads, you pick out your fabrics and we show you the thread and the work and the beading, and she sketches everything in front of you and you can see your patterns and you can actually see what you’re imagining, and then we move on forward from that.”

Poshak’s designer Sameera Faridi will travel to Pakistan to hand-deliver your order, where it will be hand died, sewn and beaded. Three months later, she’ll get back on a plane to pick it up.

Ahmed says business has really picked up since the store opened eight years ago. He says their clientele is as diverse as Houston.

“We have white people coming in all the time, and I wouldn’t just say white, we have multi-ethnicities, multi-religious,” Ahmed says. “We have Arabs coming in, we have Middle Eastern folks, we have people coming in from European also, and a lot of island people – because they have Indian heritage – who want to do a mix and match of all their color schemes,”

Roop Sari Palace is about the size of a Texas supermarket.

“This is all their stuff, massive, you could spend hours in here,” Akhtar says.

On a weekday lunch, about 40 women browse through the racks. This part of town was designated the Mahatma Gandhi District in 2010, and is known for its South Asian restaurants and sari shops.

“In the South, definitely there is very little competition in other states,” Ahmed says. “You go to Alabama, Louisiana even up to Atlanta, very few people have as many options as you would in Houston.”

“From here down you can stop by at least a dozen stores and they’re all loaded and they’re full.”

Ahmed says a lot of his customers buy outfits in Houston and then wear them in Pakistan.

Although Ahktar has never been to Pakistan, she says she loves a good sari.

“This is the traditional sari the three piece style that I love, I just think it’s so elegant,” Akhtar says while examining a bright blue and pink style.

She’s found a few saris that she likes here, but she’s not buying; sometimes the hardest part of buying a sari is finding the perfect event to match.