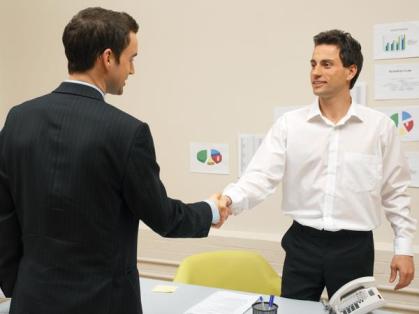 We all know how the hiring process works. A hiring manager posts an opening, describes their ideal candidate and waits for the influx of resumes. After doing some interviews, the manager has to make a gut decision, a subjective assessment – and the research shows that more often than not, they’ll pick someone who has a really similar background as them. Peter Vujosevic noticed this problem, and decided to approach hiring from a different angle.

“You always rely on your biases it’s just part of human nature, nine out of ten times it’s good to rely on biases,” Vujosevic says. “You know, however, what we see when it comes to hiring is that the hiring manager is often a participant very late in the process.”

By the time a candidate sits down for an interview and gets grilled with technical questions, it’s nearing the end of the hiring process.

Vujosevic created a website called Gap Jumpers, where employers post a job along with some sort of challenge, like creating a webpage or writing a social media strategy. To apply for the job, applicants must take on the challenge.

Vusojevic compares it to his favorite TV show, NBC’s The Voice, where three celebrity judges sit in red super villain chairs with their backs turned to the stage. And then, someone sings. The judges hit a button and turn their chair around. That’s the first time they see who’s performing, but they’ve already decided.

That’s kind of how Gap Jumpers works. Jeremiah Reyes is in charge of hiring at Dolby Laboratories. He wanted a way to get fewer, better quality job candidates.

“It completely disrupts the traditional interview process,” Reyes says. “I think what made it fun is that my managers and students were able to engage in some real thought out questions and answers.“

Reyes says Dolby’s been hiring more people with non-traditional backgrounds. Just the other day, a hiring manager was shocked to discover his favorite candidate came from a community college.

“Now the one that we did select, even in our debrief, he said ‘Wow, I think if I just saw his resume on my desk, I don’t know that I would have selected him,’” Reyes says.

Sara Inés Calderón is looking for a job as a developer. She hopes more tech companies will start doing blind interviews.

“I have had experiences where someone told me flat out ‘we think you could bring a feminine touch to the office,’” Calderon says. “I’ve been interviewed by people who are literally playing by their phones or leaning back in their chair.”

Calderón graduated from an intense coding boot camp for Latinos. Three months later, most of the men in her cohort have landed jobs.

“I think overall, when I do go interview, I kind of have what some people would call flamboyant tastes in colors and patterns,” she says. “I do tend to wear like very loud and dangly and big earrings, and I have gone in like bright green sports coats and stuff like that, I still think they’re professional, they’re just colorful.”

Calderón believes that if employers just saw her work first, they’d forget the fingers typing away at a laptop are covered in Frida Kahlo nail decals.