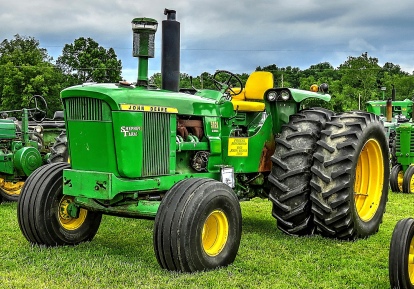 You know how you own your computer, but you don’t own the software on your computer? That’s the argument that John Deere’s lawyers are citing to make sure farmers don’t tinker with their tractors.

Dale Artho lives on his farm in Wildorado, Texas. He says John Deere’s legal maneuverings are making him mad.

“I could use some really blunt words for that, but since we’re on the air I won’t,” Artho says.

“They have computers on them that monitor speed, they actually do more than what we actually require at the point, the only thing they don’t do is that they don’t drive themselves,” Artho says.

But John Deere disagrees; Ken Golden is a spokesman for the Fortune 500 company.

“A big part of our issue is the safety of our customers,” Golden says. “You begin to hack the software and change how the product actually functions, and you can endanger yourself and those who work on that vehicle.”

Most manufacturers place digital locks over their software. Breaking the lock, making a copy and changing the code could be construed as a violation of copyright law.

The U.S. Copyright Office is considering passing an exemption to make it easier for consumers to hack into their own electronics, a move John Deere and other companies say would be bad for innovation and bottom lines.

“This would allow a Deere competitor to take our software and change it modify and basically take the investment that Deere has made to make its computers work very well for customers,” Golden says.

But what if Artho could hack into the computer code that snakes through his tractor and make it run all by itself? Isn’t that the definition of innovation?

Brandon Levitt is an intellectual property attorney in Dallas.

“They’re both good arguments coming at it from different perspectives and it’s the job of the copyright office to review all of those arguments and decide the best approach for this exemption,” Levitt says.

The exemption would limit which high-tech devices we can modify, hack, and repair. And that could impact everything: your car, your dishwasher, even your cat’s self-cleaning litter box are all up for review.