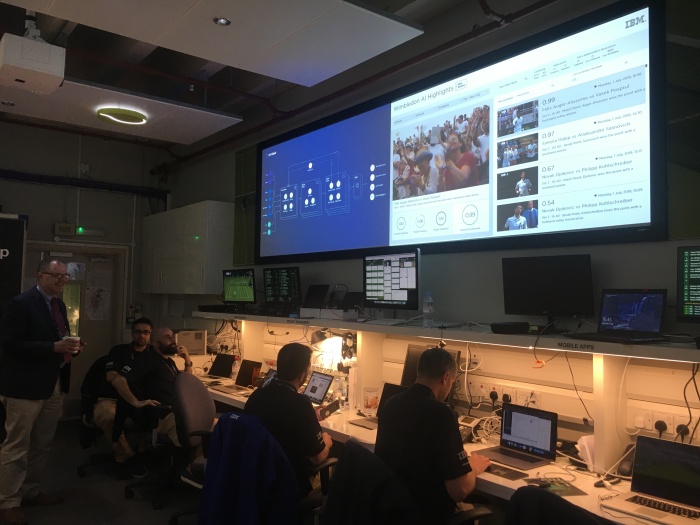 Get the full story on NPR.

Match highlights at Wimbledon are selected and assembled by robots. Artificial intelligence is used to pick the most dramatic moments, making those judgments by crowd noise and player gestures.

Wimbledon is in its second week, a tennis tournament steeped in tradition and also embracing artificial intelligence. We should note that a company that makes AI, IBM, is a financial supporter of NPR on our way to letting you know that Wimbledon is using AI to produce highlights of the most exciting moments much more quickly than a human producer. But how does a computer program know what makes for good tennis? At Wimbledon, Brenda Salinas explains.

BRENDA SALINAS, BYLINE: Fans from all over the world are gathered around 18 grass tennis courts cheering on their favorite players.

SALINAS: In this match, Russian Daniil Medvedev faces off against the Italian Paolo Lorenzi.

SALINAS: But I’m not watching the tennis drinking a traditional Pimm’s cocktail. I’m in a basement where engineers use that very sound you’re hearing to power an artificially intelligent program.

ALEXANDRA WILLIS: We are in the room affectionately known as The Bunker.

SALINAS: Alexandra Willis heads up digital marketing at Wimbledon. She shows me the IBM dashboard that can automatically determine what parts of a tennis match are the most exciting for fans to watch. Every match is automatically clipped and ranked according to three categories.

WILLIS: The first is the noise of the crowd. So how they react to that particular point.

SALINAS: The computer program knows what point in the match it is.

WILLIS: So was it break point? Was it an ace? What kind of point was it?

SALINAS: And lastly, the tricky bit, what emotions the human tennis player is feeling.

WILLIS: So are they fist pumping? Are they actually looking in complete despair?

SALINAS: That’s right, the computer can tell whether a tennis player is celebrating or wincing in despair.

WILLIS: For a while, player gestures, it was picking up this movement – wiping your face – and thinking, is that some kind of celebration? Actually, it was the player saying, I want my towel. So that’s the whole beauty of this, is that we have to test it and learn it constantly.

SALINAS: Wimbledon has been using this technology for three years, but this year, it says it’s smarter than ever. The highlight reels get distributed all over Wimbledon’s digital properties, including on the Jumbotrons and its YouTube channel. IBM engineer Dave Provan shows me how it works.

DAVE PROVAN: Good crowd reaction on the volley. Looks like a set point. So the highlight will automatically do the set points, match points and other points like that.

SALINAS: The polished highlights reel comes together just two minutes after a match has ended. That’s about nine times faster than a human video editor. Plus the program can analyze matches across 18 courts. No human can do that.

So did this just come to you like this?

PROVAN: Yeah. It comes fully edited like this together.

SALINAS: No human input at all?

PROVAN: There’s human review to make sure that it looks good, but yeah, it’s basically an automatic system.

SALINAS: Tennis always follows the same structure, but the story of every match is different. That’s why Courtney Nguyen is skeptical that robots can capture the most important parts of the game.

SALINAS: Nguyen hosts a podcast for the Women’s Tennis Association where she analyzes the texture of the game.

NGUYEN: I think that when you’re actually cutting a highlight package that tells the true story of the match, there could be, you know, in oftentimes, in those situations, something very different happening that maybe even a crowd completely misses, or even a player doesn’t even notice is happening, could turn a match.