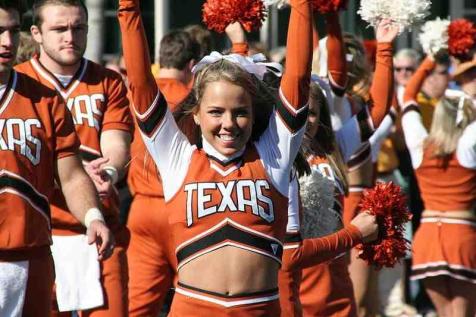 Get the full story at KUT.org

Fall can only mean one thing in Texas: football season.

As fans and players enjoy the throes of high school and college football season, many leagues, schools and parents are tackling the threat of concussions with safety-conscious policies like increased concussion testing and mandatory return-to-play protocols.

But research suggests more focus should be given to the athletes on the sidelines as well: cheerleaders.

At the Cheer Athletics Club in Austin, three teenaged girls weave their hands into a basket. A fourth girl — she’s the flyer — jumps into their hands as a coach watches. The girls propel her into the air. She twists twice, scissors her legs and lands in their cradled arms.

The club’s varsity team is perfecting a new move, and this learning stage is the most risky. There are hundreds of aspects in a jump that can go wrong. But usually, the flyer is caught safely by her teammates.

Not everyone is so lucky. According to a 2013 report in the Journal of Pediatrics, cheerleading causes tw0-thirds of all catastrophic injuries in high school girls.

Michael Reardon heads the concussion clinic at Dell Children’s Medical Center in Austin. He says severe injuries to the spine and neck are relatively rare in cheerleading, but concussions are common and underreported.

“Every month we’ll see a couple of cheerleaders that had a crash and it’s either the flyers who are being thrown up in the air or it’s the people that catch them that end up being injured, so those guys are definitely at risk of concussion,” Reardon said.

A concussion is a type of traumatic injury caused by a blow to the head that shakes the brain inside the skull, but you don’t have to lose consciousness to get one.

Concussions are better tracked in football. The NFL admits that brain trauma affects 1 in 3 players. Those statistics have raised concerns about head injuries in youth sports like football and soccer, but not so much in cheerleading.

Gerald Ladner, a coach at the Cheer Athletics Club, explained how he tests for concussions.

“If the eyes are dilated, I close her eyes,” Ladner said. “I open it up and see and if they dilate even further. If I have a question on it I take her to a dark room, turn the lights off, turn the lights on…I do a finger test to see if she follows the eyes and if her head starts to shake, that’s when we show a little more concern.”

The best way to deal with a concussion is to rest. But that’s easier said than done. Annie Bodenschatz, a 15-year-old cheerleader, sustained a concussion four years ago while practicing for a competition, but she refused to keep herself out of the contest. She didn’t want to let her team down.

“I blacked out for a second and then I had all the symptoms and stuff, but I didn’t go to the doctor until after the competition because I had to compete a few minutes later.”

Reardon said athletes should be fully recovered before playing again.

“If somebody has had a concussion, then doing tumbling and gymnastics becomes very risky in terms of aggravating their symptoms,” Reardon said. “If somebody hasn’t fully recovered and they’re having difficulty with their reaction time or balance or coordination, then there’s significant risks.”

“The practice-related injury rate in general and concussion rates more specifically are higher than injury rates in competition or in the case of cheerleading, in performance,” Comstock said.

That’s not the case for the 16 other sports in her data set. Comstock explained why.

Those advantages include proper tumbling mats and qualified coaches. That’s why Bodenschantz didn’t try out for her high school’s team.

“From what I hear, they get hurt a lot because they don’t have very experienced girls,” Bodenschantz said. “They always make them tumble even when they don’t really know how and they don’t really have great coaches teaching them, so I feel like high school cheer is a little scary.”

In Texas, the University Interscholastic League voted this summer to allow cheerleading as a sport, but that classification doesn’t start until next year. At the high school level, schools can’t legally use cheerleading to qualify for Title IX funding, which could potentially bring better equipment.

That doesn’t mean cheerleaders aren’t athletes. Especially at the highest levels of competition where aerial twists, flips and other acrobatics are common, it means they’re at risk.