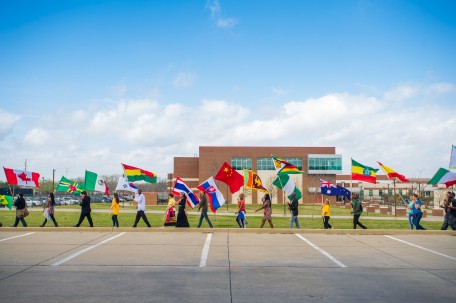 People of color are pretty used to seeing their cultures portrayed in a stereotypical way, especially in advertising. Remember when Ashton Kutcher played a Bollywood director for Popchips? Or the Taco Bell Chihuahua?

“To be honest I don’t like any of the ads, like the for example Taco Bell and the Chihuahua – I’m not for that.” she says.  “To me it’s kind of a disgrace to both languages to be combining them in an ad.”

It seems like it is so easy to get it wrong. Zayna Usman says she’s studying public relations because she’s determined to get it right.

“When there’s an ad that’s like exceptional and it’s not just there as the token person of color in the ad then I like them but most of the time it’s four white person and one black person or one brown person,” Usman says. “I guess the commercial aspect of it bothers me.”

Tokenism. That’s what Alejandro Ruelas wanted to avoid when he co-founded LatinWorks – a Hispanic advertising agency in Austin.

“It’s doing your homework,” he says. “It’s dedicating enough time to understanding what it is that you’re solving for, knowing that it’s not a one-size fits all answer.”

Ruelas says he’s been able dominate the Hispanic market with this strategy, so he’s taking it to the next level with a new agency to target multicultural millennials: Sibling.

“The reason behind the establishment of Silbing is because we see a void and an opportunity to consumers that are part of the millennial cohort if you will, and they are a group that traditionally has not been focused on by marketing organizations,” Ruelas says.

In 2013 ABC and Univision launched a cable channel to target multicultural millennials. The Miami-based channel has modest ratings but a solid social media presence.

State Demographer Lloyd Potter says if you want to launch a national project to reach multicultural millennials, it makes sense to start in Texas. It’s the youngest and most diverse state in the country.

“Well Texas already is a minority-majority state and has been since the mid 80s,” Potter says. “And when I say that I mean non-Hispanic white compared to all other race ethnic groups.”

Latinos and Asians under 45 are the fastest-growing demographics in Texas. Those are just two of the groups Alejandro Ruelas is hoping to target with his agency.